Les Fruits de Mer began in 2007 as the world’s first Extreme Shallow Snorkeling team, born from a love of snorkeling and the undersea world. By pioneering the sport, art, and science of E.S.S. (Extreme Shallow Snorkeling) on multinational expeditions, the Les Fruits de Mer team ignited the interest of people around the globe in exploring and celebrating marine wildlife. As more people from more and more countries joined the team, we began to share not only the beauty of the sea but also other natural places, terrestrial wildlife, history, ecology, and cultural heritage, through educational outreach, events, and publications. Our mission organically broadened to include raising awareness of nature, culture, and sport, locally and internationally. To carry it out on a more epic and powerful level, we formed the Les Fruits de Mer Association in 2013.

President
Jennifer Yerkes is one of the co-founding members of the Les Fruits de Mer team. Jenn has served as the team’s Chief of Expeditions since its inception in 2007, leading missions around the globe. She worked in advertising and PR in New York City for a decade before moving to St. Martin. She is currently leveraging her extensive expertise in writing, branding, and creative direction for the Association’s communications, and to develop a series of educational books for children based on the wildlife of St. Martin. A PADI Rescue Diver and avid snorkeler, she is also deeply interested in local food and folklore. 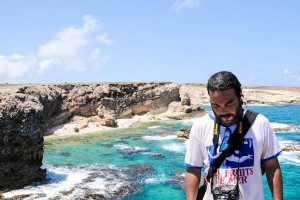 Treasurer
Mark Yokoyama is one of the co-founding members of the Les Fruits de Mer team. Mark is the author of The Incomplete Guide to the Wildlife of Saint Martin and a regular wildlife columnist for The Daily Herald and SXMInfo. He is an accomplished nature photographer whose work has appeared in internationally-renowned publications including The New York Times and The Economist. A former business consultant and former President of the Oregon Entomological Society, Mark now spends his time doing wildlife research and photography, conducting wildlife education, and promoting authentic, sustainable wildlife tourism on the island of St. Martin and beyond.