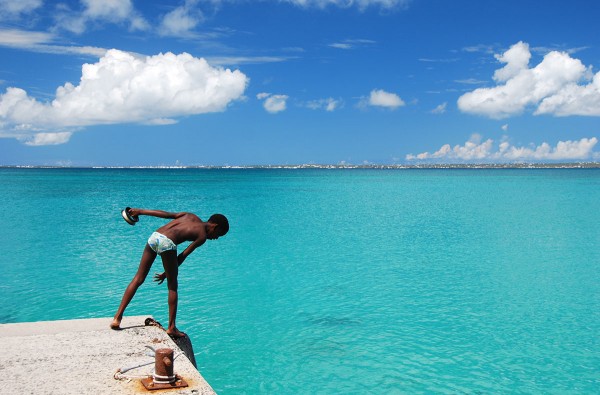 Vibrant
Little St martiner fishing on the dock of Grand Case Bay, trying to catch small fish hiding under the dock. this scene offers a traditional vision of recreation activities that should remain in island children education. no need for computers or iphone for children to entertain, the sea should be the first playground for every islander.

Vulnerable
Children playing on what remains of grand case beach under the leaks of dirty used waters from the houses above showing the sewer problems in downtown Grand case that pollute the salt pond and the bay. it is not rare that some children or adults get infected by the larva migrans (french « ver a chien » ) brought by dogs and common in the sand near urban areas that gives it a suitable habitat. you can also see how the beach moves year after year, getting closer to habitations and starting to dig the foundations of the buildings, raising a problem about the waves echo. the waves hitting the concrete echoes back to the water and creates an unnatural force that can create different current or move that can accelerate erosion. Of course Swell direction is the main factor on the different shapes given to the bay throughout the year, but urbanism too close to shore is an undeniable issue.