The Cuban Treefrog is native to Cuba, the Bahamas and the Cayman Islands, but humans have brought it to many other places. It now lives in Florida, Hawaii and many Caribbean islands. Although it needed the help of humans to get to new lands—probably as a stowaway with shipments of plants or other materials—it is very adept at colonizing new places once it arrives.

St. Martin poses a number of challenges for the Cuban Treefrog. For starters, there simply isn’t much fresh water. Most of the ponds on the island are salty or brackish, which is not good if you have permeable skin that can absorb salt. There are no real rivers, and most of the fresh water in guts and roadside ditches is swarming with guppies and other fish that would love to eat young tadpoles.

What’s a frog to do then? For starters, they lay a lot of eggs: 100 to 1,000 at a time. Also, they can hop to water that fish can’t reach, like livestock ponds, wells and even puddles. Of course, this means they have to grow up fast before their puddle disappears. They start by eating algae, which is the primary food for Cuban Treefrog tadpoles, but as their home gets smaller, things take a turn towards the sinister.

In the race agains time, the tadpoles will often eat their brothers and sisters. This provides the best chance for at least a few to survive and transform into frogs before their water runs out. It may seem unpleasant, but for the survival of the species, it is much better than all of the tadpoles dying when their puddle evaporates.

While their ability to thrive on a relatively dry island is impressive, it isn’t necessarily a good thing for native animals. Like all invasive species, the Cuban Treefrog can upset the delicate balance of life on an island. Animals like our native lizards—including species found only on St. Martin—are potential prey for the Cuban Treefrog.

You can learn more about both invasive species and freshwater ecosystems on St. Martin at Amuseum Naturalis, located at 96 Boulevard de Grand Case. The museum is free and open 4-8pm on Tuesdays and Thursdays. Get more info at http://amuseumnaturalis.com. 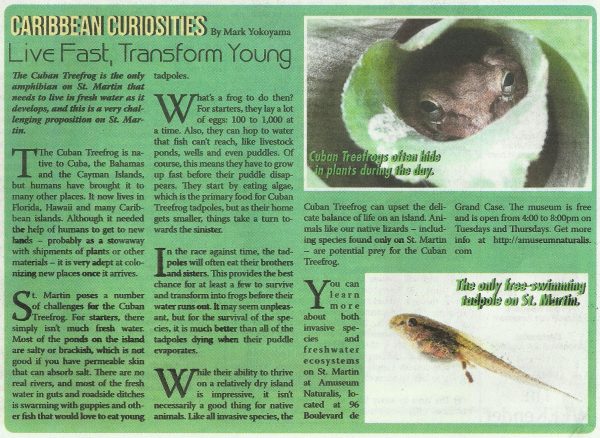