The ravines on the western slope of Pic Paradis feature a forest unlike anything else on St. Martin—or neighboring Anguilla and St. Barts for that matter. It is the homeland of our Bearded Anole, and may have been its birthplace, too.

In ecology, endemic means something that is only found in one specific place. There are a couple ways this can happen. A neoendemic species is a new species that evolves in a unique location. This happens a lot on islands. The term paleoendemic describes almost the opposite situation: the last refuge of a species that was once more widespread. This can happen on an island, too.

Our beautiful Bearded Anole—like most of our native reptiles—is a great example of a neoendemic species. Little lizards spread from island to island, blossoming into a wide variety of species as they adapted to their new homes. Lush forest may have been ancestral home of this species. It is ill-suited to the full heat of the tropical sun, and is primarily found in shady areas.

For most of the last 100,000 years, the Bearded Anole probably had lots of habitat. Sea levels were lower, and St. Martin was part of a much bigger island that included present-day Anguilla, St. Barts and beyond. Surely there were many shady forests where this lizard could live.

Around 12,000 years ago, rising sea levels separated St. Martin, Anguilla and St. Barts. The Bearded Anole probably lived on all three islands, but St. Barts and Anguilla are both lower than St. Martin. Because of this, they lacked the water and wind protection to develop the type of broadleaf forest that stretches from Colombier up to Pic Paradis.

We have no record of the Bearded Anole on St. Barts, and it was last recorded on Anguilla in the 1920s. Today it lives only on St. Martin, a relict population in its last refuge. It is both a neoendemic species that arose here, and a paleoendemic species that disappeared from the other places it lived.

Many of natures most miraculous creatures evolved on islands. They make up a tiny percentage of the land mass of the earth, but are home to much of the planet’s diversity. Unfortunately, over half of animal extinctions have also happened on islands, a trend that continues. The individuality of the island—in richness and struggle—is reflected in our Bearded Anole.

You can learn more about the Bearded Anole and other animals found only on St. Martin at Amuseum Naturalis, located at 96 Boulevard de Grand Case. The museum is free and open 4-8pm on Tuesdays and Thursdays. On Sunday, April 23rd from 9am-3pm the Amuseum will host the 2017 Endemic Animal Festival. Get more info at http://amuseumnaturalis.com. 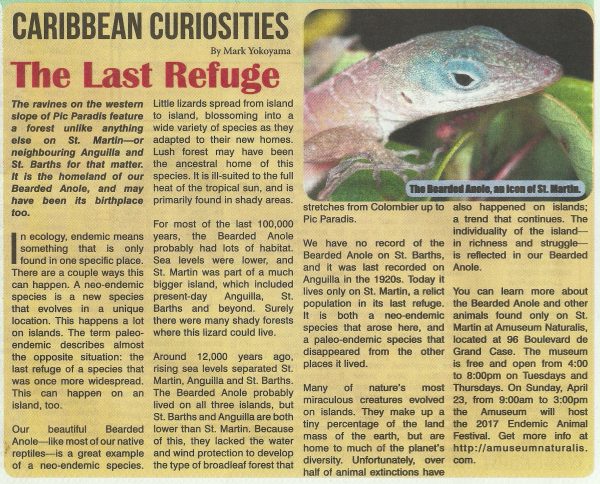