They’re all around us, but we rarely notice them. They’re specially-equipped for climbing, but mostly live on the ground. They’re probably the most common reptiles on St. Martin, but few people even know their names.

St. Martin’s dwarf geckos are some of its most unique and mysterious residents. The island has two species. The smaller one is known as the Little Woodslave or Anguilla Bank Dwarf Gecko. The larger is called the Least Island Gecko or Leeward Banded Dwarf Gecko. Hidden in their confusing names are some clues to how unique they are.

The Little Woodslave is found on only a few islands in the world: Anguilla, St. Martin, St. Barts and the smaller islets in the immediate area. Combined, these islands make up the Anguilla Bank featured in the name Anguilla Bank Dwarf Gecko. When the last ice age lowered sea levels by locking water in glaciers, these islands were connected into a larger island. Hop over to Saba or Statia—which have never been connected to St. Martin—and you won’t find the Little Woodslave. Its cousin, the Saban Dwarf Gecko, lives there.

It’s hard to say what the name Least Island Gecko is supposed to mean. It doesn’t live on the fewest islands—it’s found from Anguilla down to Nevis. It also isn’t the smallest—there is a smaller dwarf gecko on every island where it lives. It’s other name, Leeward Banded Dwarf Gecko, isn’t much better. Sometimes they are banded, but other times not at all.

Dwarf geckos may be small, but they do have strength in numbers. There are over 100 species of dwarf gecko in the genus Sphaerodactylus, and the vast majority live only in the Caribbean. This vibrant diversity is one reason the Caribbean is considered a biodiversity hotspot.

In terms of population, one study measured dwarf gecko density equivalent to 21,000 geckos per acre. In theory that would work out to about 450 million dwarf geckos on St. Martin, if the entire island were perfect habitat for them. Probably there are far fewer, but the real number could be almost unimaginably high.

What do these tiny lizards do? They eat insects. Mostly ants and other very small things, and probably a lot of them. Perhaps enough to impact the whole ecosystem of the island. They turned their miniature size into an advantage that made them incredibly successful. In the Caribbean, their tiny feet leave a big footprint.

You can learn more about dwarf geckos and other animals found only in our region at Amuseum Naturalis, located at 96 Boulevard de Grand Case. The museum is free and open 4-8pm on Tuesdays and Thursdays. Get more info at http://amuseumnaturalis.com. 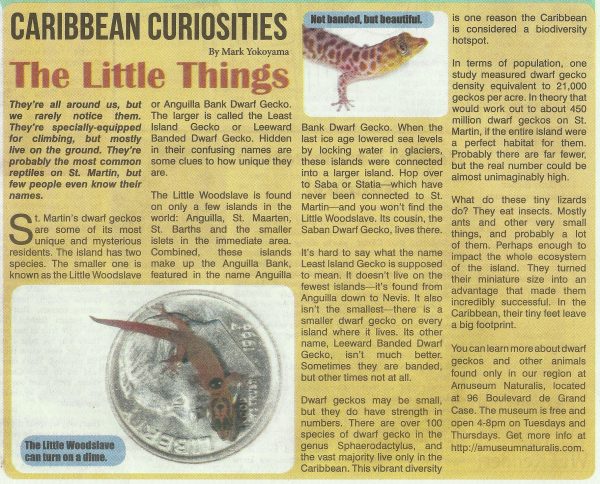