Get an inside look at science as it happens in the Caribbean. This week we dive into the freshwater ecosystems of St. Kitts and Nevis.

Ghaut, ghut, gut: however you spell it, it refers to the steep ravines that link hills and mountains to the sea. Nestled in the bottom of some, we find streams or springs. These may flow always, seasonally or only during heavy rains. A common geological feature in the Caribbean, they are a key resource for both man and nature.

Ghauts are often home to massive trees. Even ghauts that are typically dry may have water beneath them, accessible to trees and plants. In some cases, it seeps from the cliffs and steep walls of the surrounding valley. The shade of a dense canopy overhead also traps moisture. In some cases, the lush forest of a ghaut quickly transitions into dry forest or scrub on the slopes to either side.

Ghauts are pathways connecting inland areas to the coast and vice versa. Running streams are an obvious example of how these pathways work. Some fish and crustaceans that live in freshwater streams send their eggs to sea, where they grow before returning to fresh water. Nutrients—like dead leaves and decaying material—flow from the hills down to coast areas where they are trapped by mangroves to provide nutrition for these wetland areas.

Other animals use ghauts as pathways, too. Bats may nest in the overhangs on the walls of a steep ghaut, and follow the valley floor like a tunnel to food sources. The fishing bat may also use streams and pools in ghauts as hunting grounds.

Streams and pools at the bottom of ghauts are important water sources for many animals. Some animals live in them: fish, crayfish, tadpoles and aquatic insects. Other animals, like birds and bats, may depend on them for drinking water.

From prehistoric times to the present day, people have also used ghauts in many of the ways that animals do. Most obviously, streams and springs are tapped for drinking water and water to irrigate agriculture. Many paths and trails also make use of ghauts. Even the harvesting of crayfish and freshwater shrimp has been done on a small scale.

Today, ghauts are largely ignored. A few key water sources are closely monitored. Some receive occasional visits by hikers. Many are clearly seen as a convenient place to dump trash. They are as important as ever to our natural systems. Will we consider them valuable enough to protect in the 21st century? 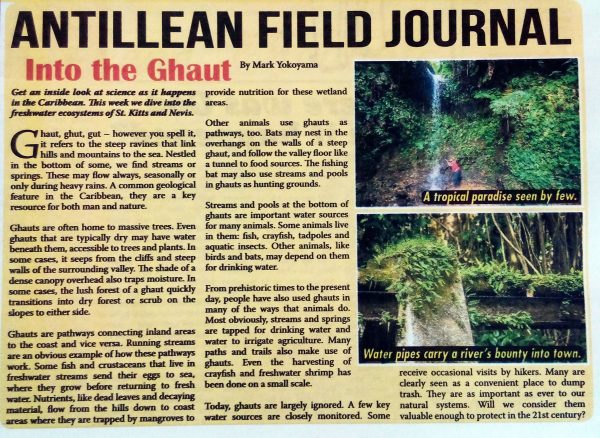