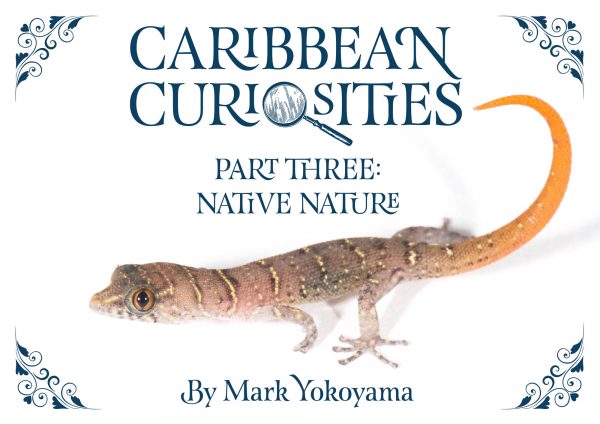 St. Martin’s native animals may not be famous yet, but they deserve to be. They are a true showcase of what makes the island unique, and some of them are found nowhere else in the world. They’re also the stars of a new ebook titled Caribbean Curiosities: Native Nature and the upcoming Endemic Animal Festival.

The free ebook tells six fascinating stories centered around different native animals, including bats, lizards, birds, fish and insects. It is illustrated with vibrant photos taken on the island. The ebook was written by Mark Yokoyama and released by the non-profit association Les Fruits de Mer. It can be downloaded from the Les Fruits de Mer website.

Les Fruits de Mer also produces the annual Endemic Animal Festival, an event celebrating the animals that are found only on St. Martin, or only in our region. This year’s event will be held at Amuseum Naturalis, St. Martin’s only natural history museum. In addition to the museum’s regular exhibits, there will be a variety of other attractions during the festival, including an Endemic Animal Discovery Station and wildlife-themed art activities. The free, all ages festival will be held on Sunday, April 23rd from 9am to 3pm.

To download Caribbean Curiosities: Native Nature and to learn more about the Endemic Animal Festival, visit lesfruitsdemer.com. Amuseum Naturalis is located at 96 Boulevard de Grand Case in Grand Case and is open Tuesdays and Thursdays 4-8pm.