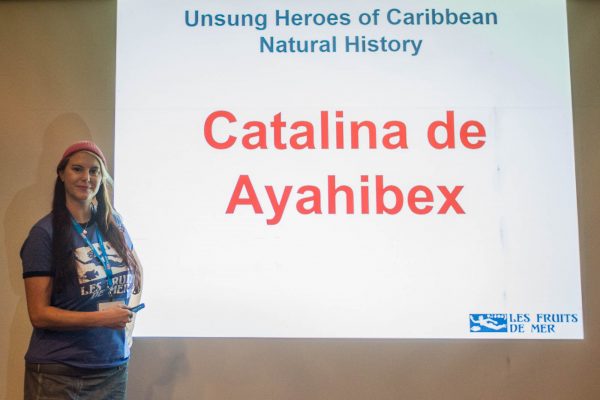 Les Fruits de Mer President Jenn Yerkes showcased early Caribbean naturalist Catalina de Ayahibex in her presentation at the 27th Congress of the International Association for Caribbean Archaeology in St. Croix in July. Her paper about this groundbreaking Amerindian plant expert will be published in the proceedings from the meeting. Jenn first discovered Catalina when researching an exhibit for Amuseum Naturalis. By bringing Catalina into the academic spotlight, Jenn hopes more information about this trailblazer and her work can be uncovered through research and perhaps even through archaeological exploration.

Catalina de Ayahibex was a Taino cacica, or tribal leader, in early 16th century Hispaniola, in the area now known as Santo Domingo. Her extensive knowledge of native plants and plant-based medicines led to the first drug patent in the New World, the first pharmaceutical business in the Americas, widespread research on Caribbean flora, and revolutionary developments in empirical science. Catalina worked with her Spanish husband Antonio de Villasante, who tested and marketed her cures. Their partnership was one of the first scientific collaborations between a European and an indigenous expert. It’s also one of the rare few over the centuries which actually recorded the contributions of a native naturalist.

One of the key discoveries Catalina is credited with in Spanish documents is Hispaniola balsam. This balsam became one of the most expensive and popular drugs in Europe during the 1500s. However, like many indigenous naturalists and female experts, Catalina was later erased from the historical and scientific record. Jenn’s work uses 16th century documents from the Spanish archives to reconstruct and reveal the lost story of this unsung hero of natural science and medicine.

Archeologists, anthropologists, and other conference attendees were impressed and intrigued by Catalina’s story. Nearly 500 years later, wider recognition of her work and legacy is beginning.